Mother Nature turned the lives upside-down for residents of two of the most populous states. Texas is still dealing with the repercussions of Hurricane Harvey, and businesses are gradually getting back on track. Look for our follow up on this in an upcoming blog. Meanwhile, Hurricane Irma brought her destructive force to Florida over the weekend, placing a third of the population under mandatory evacuation. Schools, shops, and businesses closed down mid-week to allow residents to evacuate with enough time. Many builders in Florida displayed banners on their websites highlighting closures from Thursday into early this week. We send our thoughts to those affected by these disastrous storms, including our team in Florida. We are working around the clock to keep our clients informed about who and what will be most effected in the wake of the storm.

As of Monday morning, Irma was downgraded to a tropical storm, but that doesn’t change the damage she caused across the state and throughout the southeastern US. The hurricane threw a curve ball when it unexpectedly turned towards the west, requiring residents to act fast to prepare. The wind and torrential rain pummeled the entire state, causing roughly 7 million residents to lose power (about a third of the entire state’s population). There were even spin-off tornadoes in places like Orlando. 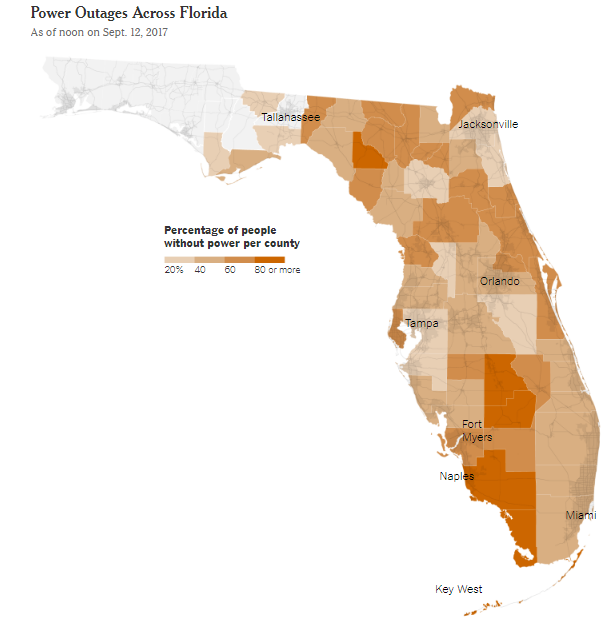 Prepared response: It’s hard to find a silver lining from Hurricane Harvey, but there’s one that helped Florida. The damage in southern Texas just weeks before Irma encouraged residents to take the storm seriously and prepare their homes accordingly.

Share of GDP: Florida’s GDP is 4% of the overall national figure (Houston makes up 2.3% of US GDP). GDP will take a hit due to the loss of economic activity from at least Wednesday (September 6th) through Monday (September 11th), but there are talks that power could be out for residents and businesses for weeks. This will impact the overall economic engine in the state of Florida as discretionary spending was put on hold. We anticipate some job losses in service sector jobs because of decreased consumer spending.

Slow to get back to normal: Many fleeing the storm will face traffic and other hurdles in getting back home. Power is still out across a lot of the state and cell service is spotty. We could see it taking longer for life to get back to normal in Florida compared to southern Texas because of the extent Irma impacted power lines.

Top builders: Lennar dominates in many top markets in Florida, capturing more than 20% of the market share for the Miami, Fort Myers, Naples, and Tampa CBSAs (see graph below). Looking at our most immediate example of Hurricane Harvey, both our meetings with clients and reports from earnings calls indicate that builders were able to get operations up and running within a week or two of the storm ( keep in mind they didn’t have as much disruption to the power grid). Even still, the builders below are at the biggest risk of delayed sales and/or damaged inventory.

Quick move-ins: Quick move-ins (or standing inventory) averaged between 3 and 5 units per community in the eastern CBSAs. These homes were vulnerable to damage, but the cost to the builders will be mixed. In many cases insurance will cover the repairs, but it takes some of their housing stock off the market in the short-run.

Increased costs and home prices: Homes across the state face damage from leaks, flying debris, falling trees, flooding, and more. These repairs will pull from an already tight construction labor market, making it harder for builders to deliver homes on time. Besides delivery schedules, the increased demand for construction labor and materials will likely drive up costs to the builder, ultimately making supplying attainable housing an even bigger challenge.

Delayed sales: It could take months to get back to a normal market environment. Systemic interruptions and buyer hesitancy may lengthen the sales pace in the short term. In addition, access to homesites and electricity make it challenging for builders to finish homes under construction. We anticipate normal market dynamics by the first quarter of next year. 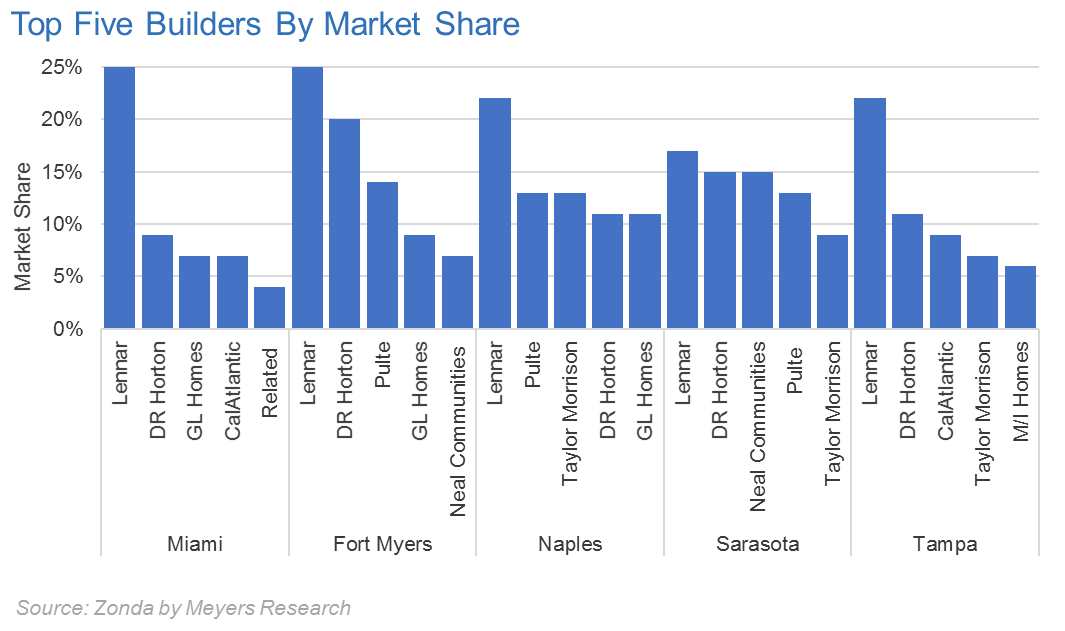 Note, the market share is based on YTD contract sales for roughly 1,200 actively selling projects tracked in Zonda.

We anticipate it will take at least 30 days for many of the markets in Florida to be up and running again. In particular, Naples has the highest share of people without electricity, hovering around 80%+. In both Tampa and Miami, where there are many actively selling communities, between 20-40% of residents are without power. We will continue to monitor the impact and advise our clients. In the meantime, if you have any questions, please feel free to reach out to Mike, our Florida specialist mentioned above, or Ali, the author of this piece.